Do you only have one weekend in New Orleans? Despite the many lengthy guides and New Orleans bucket lists, you can have plenty of meaningful, authentic experiences in just a short weekend.

This two day New Orleans itinerary is perfect for a short weekend away or a stop on a Gulf Coast road trip. We spent two days in jazzy New Orleans while road tripping from New York through a few Gulf Coast cities. In our efforts to see a few other cities, we jam packed our short time in NOLA. It felt a tad rushed, but we had plenty of time for history, culture, and incredible food/drinks! 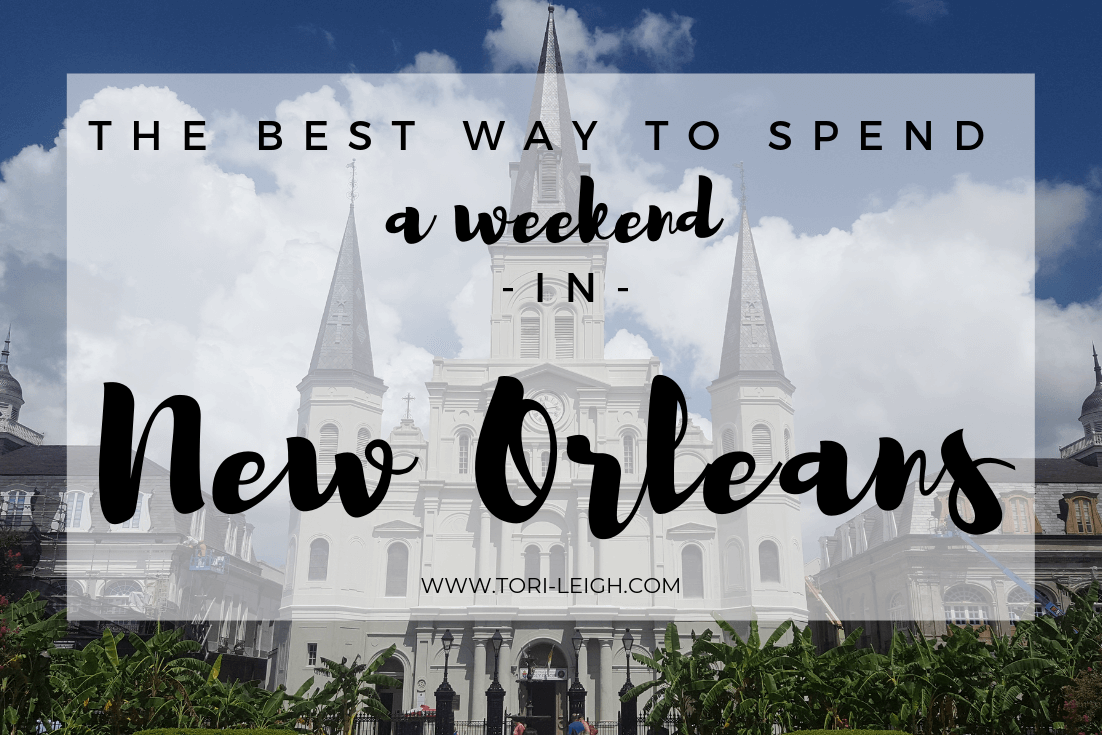 Ideally, to make the most of a full weekend in New Orleans, you need to bookend your sightseeing days with traveling. Our road trip itinerary for New Orleans looked like this:

If you’re not road tripping and don’t have extra travel days, I suggest flying and using this itinerary:

Highlights for your weekend in New Orleans include a trip to one of the country’s best museums, eating at Louisiana’s top restaurant, and plenty of time in the French Quarter. Despite the timeline, you have plenty of opportunity for local fare, history, and authentic experiences. 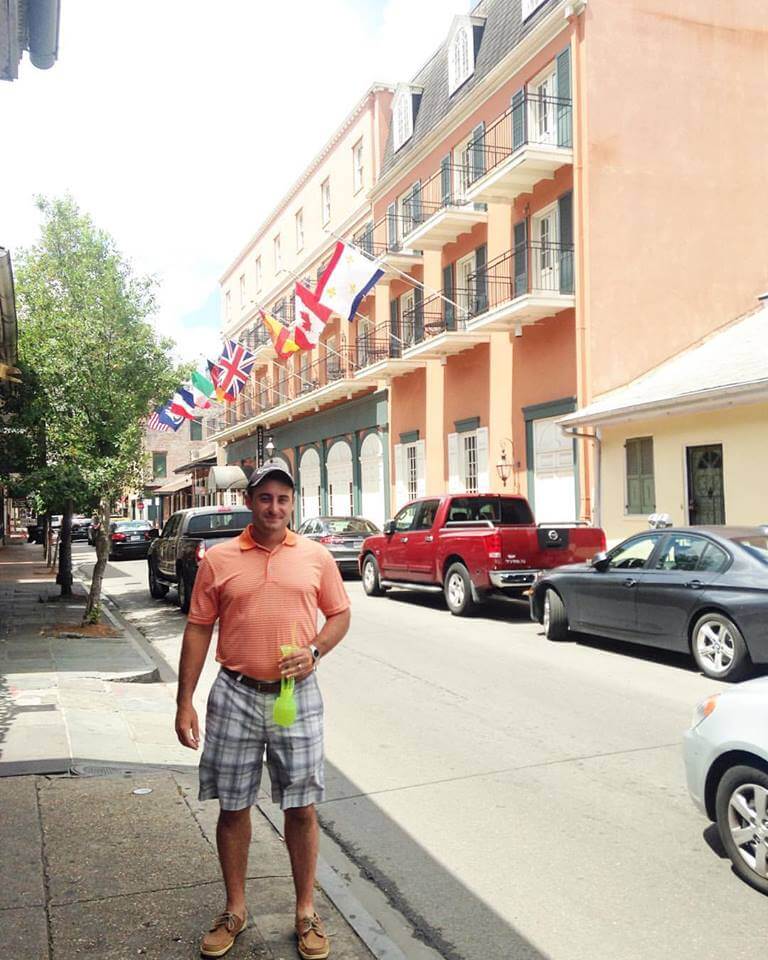 Accommodations for a Weekend in New Orleans

Making the most of a weekend in New Orleans depends on the right accommodations. Especially if this is your first trip, splurge for a stay in the French Quarter. There’s plenty to see and do outside of the popular French Quarter, but during a short weekend, that’s where you’ll want to be.

During our short trip, we stayed at The Dauphine Orleans, a small, boutique-style hotel with a restored carriage house, courtyard, and haunted bar. The hotel is home of May Baily’s Place Bar.  Originally, May Baily’s was one of New Orlean’s first bordellos. Much of the sultry aesthetic remains and can be seen while you sip sultry cocktails. May Baily’s is also rumored to be haunted by a female bordello worker specializing in mixing drinks for her gentleman callers.

I’d love to tell you that we selected the hotel for the unique bar, the library tucked away next to the barstools, or the NOLA feels. The free parking was what we couldn’t pass up. During the summer, the Dauphine Orleans runs special packages that included free parking. You also get a free drink, but stay for a second! 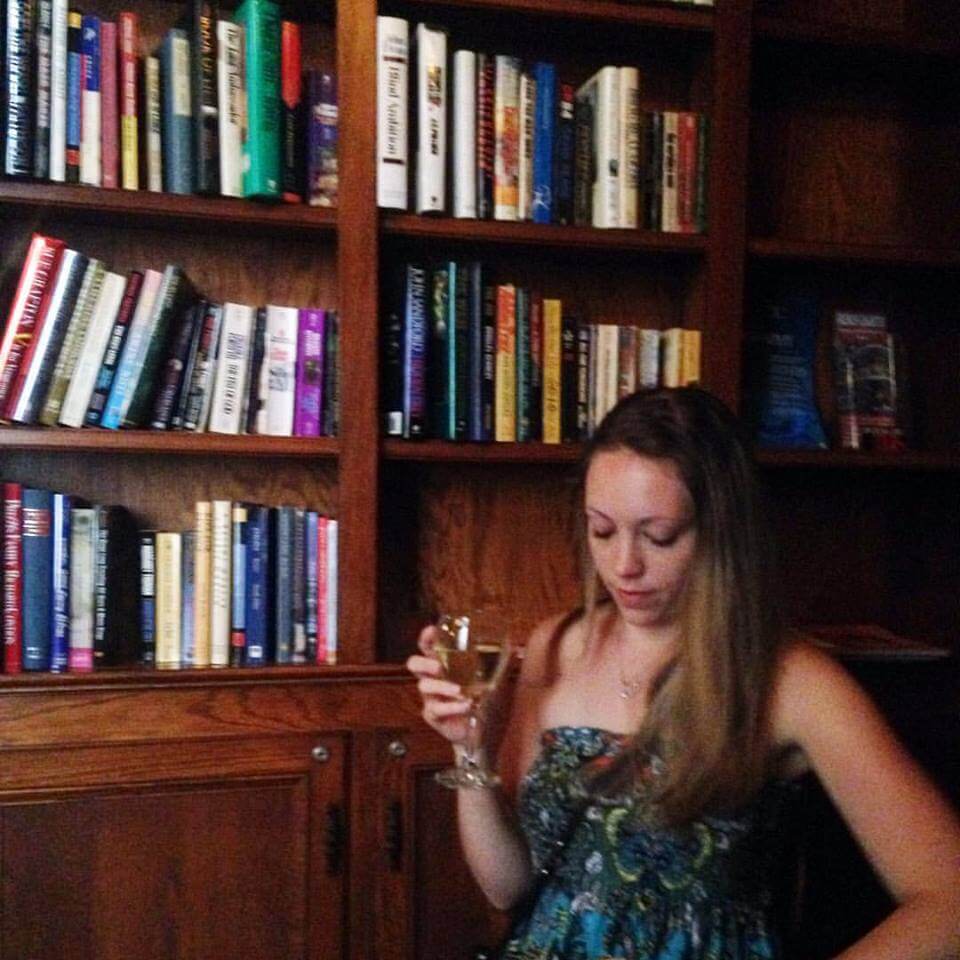 The Perfect Itinerary for Two Days in New Orleans

Phew. It’s exhausting thinking about doing it all in a day, but you didn’t come to New Orleans to take it easy!

– A Slow Morning in New Orleans –

Nothing screams New Orleans like starting your day at Cafe du Monde. Except maybe a Sazerac. It might be the ultimate tourist trap, but it’s absolutely worth it. The earlier you get there, the better. It can take a hot minute to get a table and you need to be AGGRESSIVE, but there’s a to-go stand around back that moves decently fast.

Mindful Travel Tip: Grab your breakfast from the to-go counter and watch the boats go by on the Mississippi River. 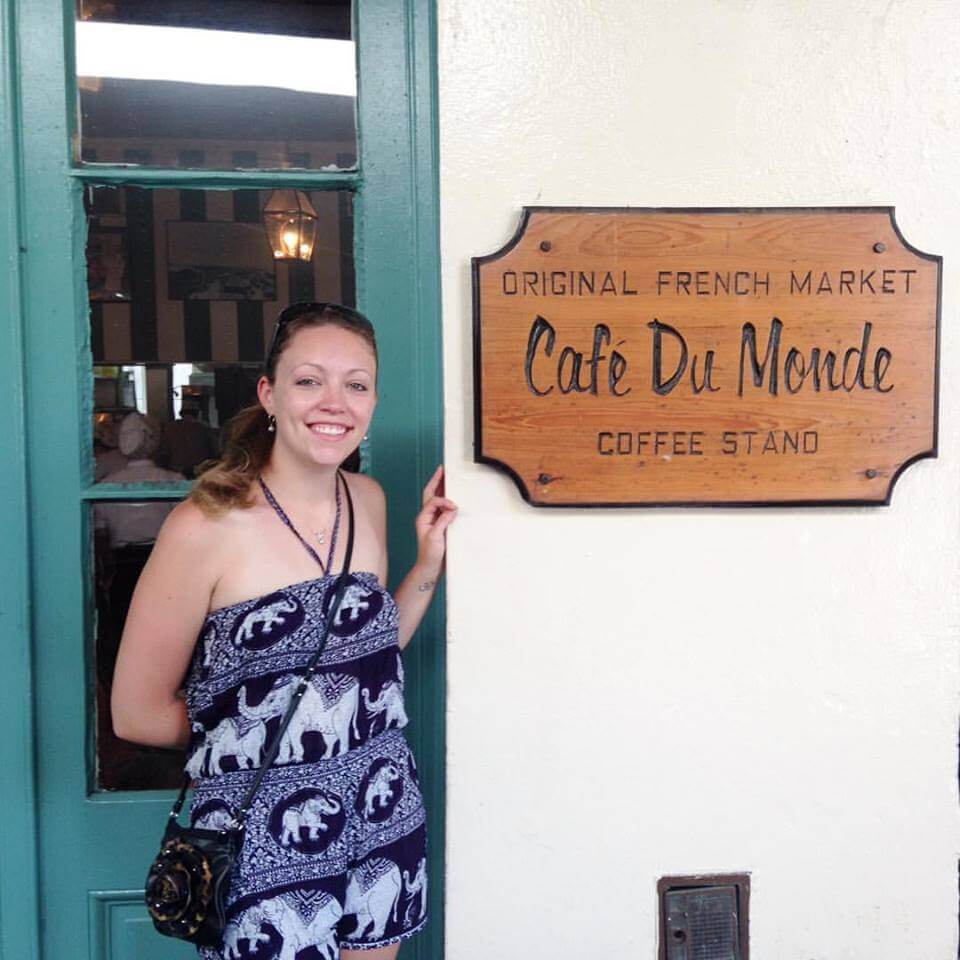 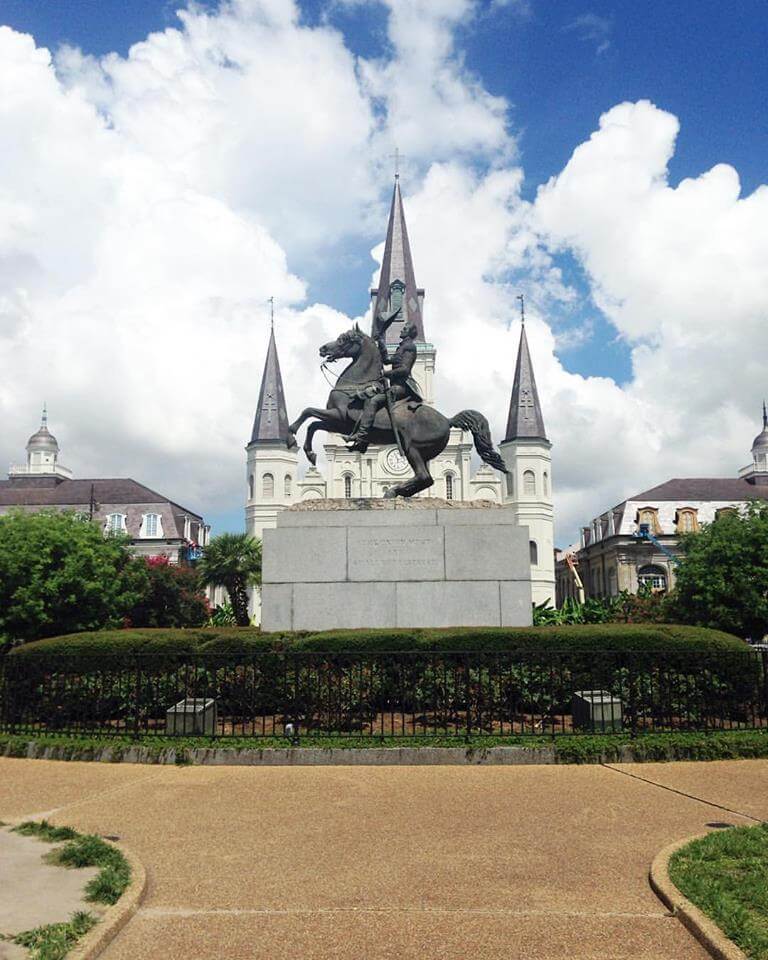 After spending some time in the cathedral and people watching in Jackson Square, we walked over to the French Market. Books, antiques, candy, art, toys, clothing, accessories, and touristy keychains flood the French Market. My favorite take-aways were the local hot sauces and cajun spices. And you thought you came to NOLA to drink?!

You came for the food. And music.

Jazz players play the saxophone on almost every street corner. One of my absolute favorite memories of New Orleans is walking around the French Market in the rain, listening to a bluesy version of These Are a Few of My Favorite Things. If you do one thing during your weekend in New Orleans, close your eyes and listen to some jazz. It was amazing until someone tried to get a few bucks out of us for shining my husbands shoes. He was wearing flip flops!

– Are you ready for a cocktail yet? –

It might only be the early afternoon if you’re following our itinerary, but it doesn’t matter here. New Orleans is one of a handful of U.S. cities in which public drinking is legal. We grabbed a gimmicky, original (maybe not so much anymore) Hurricane at Pat O’Brien’s before heading to lunch.

Lunch at Antoine’s Hermes Bar was the absolute highlight of our entire trip.

Antoine’s is famous for the Oyster’s Rockefeller, but you really want to visit to chat with their bartender, Mike. Skip sitting in the restaurant and grab a seat at the Hermes Bar. 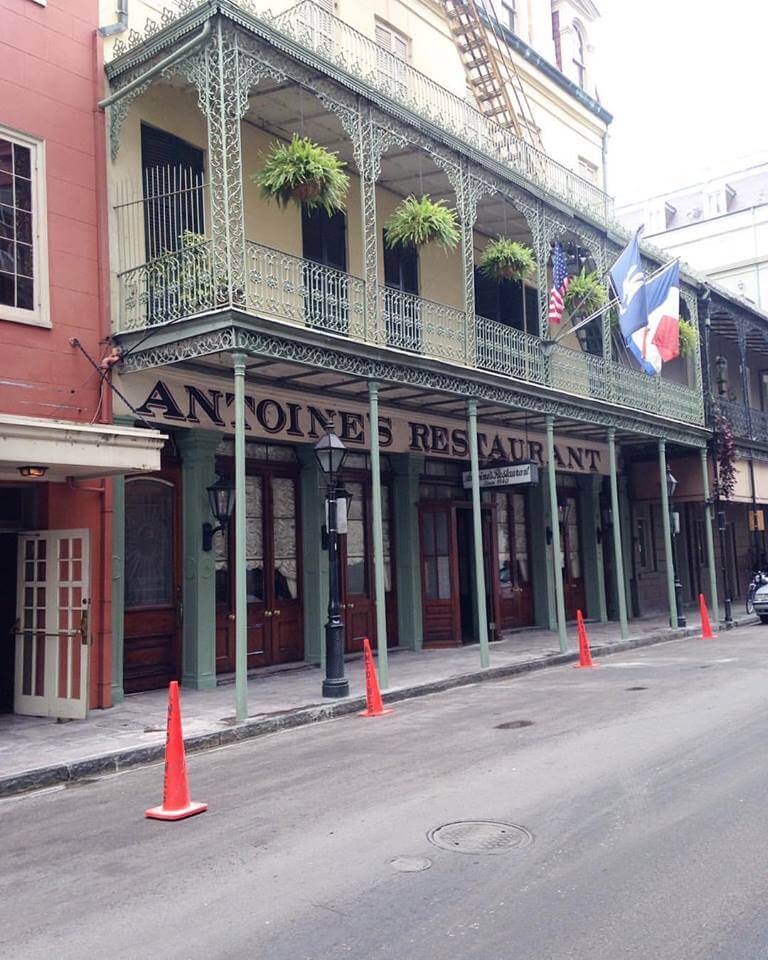 Mindful Travel Tip: Ask Mike for a cocktail recommendation, order oysters and a gumbo, and listen to his insider stories or New Orleans.

The best thing about travel isn’t eating at famous restaurants (though many are wonderful), finding the most Instagrammable hotspots, or checking off bucket lists. It’s finding people and places that allow your trip to be authentic. Though we were pressed for time with just a weekend in New Orleans, slowing down to spend time chatting with Mike was the thing I remember most fondly from our trip.

– An Afternoon at the Cemetery –

You’ll be hard-pressed to find a better New Orleans experience than chatting with Mike at Hermes Bar, but heading to an authentic NOLA Cemetery is a must. Saint Louis Cemetery #1 is the oldest in New Orleans and houses the tomb of VooDoo Queen, Marie Laveau. Unless you have family interred at the cemetery, you will need an organized tour or private guide.

A coworker of mine recommended Save our Cemeteries for a tour. The organization is dedicated to promoting and protecting the cemeteries of New Orleans through restoration, education, and advocacy. They are the only New Orleans tour group entirely dedicated to cemetery preservation. Tours are $20/person and, as a non-profit, all of your money goes towards preserving what you came to see. Talk about responsible tourism!

After a quick rest at our hotel bar, we headed into the Garden District for our first night in New Orleans. The Garden District, while more residential, is home of the famed Commander’s Palace, shopping on Magazine Street, and Lafayette Cemetery.

The best, and most authentic, way to get around New Orleans is by street car. A 24 hour pass is $3 per person. We used it getting to Commander’s Palace and the following afternoon. The St. Charles Street Car picks up at the edge of the French Quarter and stops a block from Commander’s Palace. 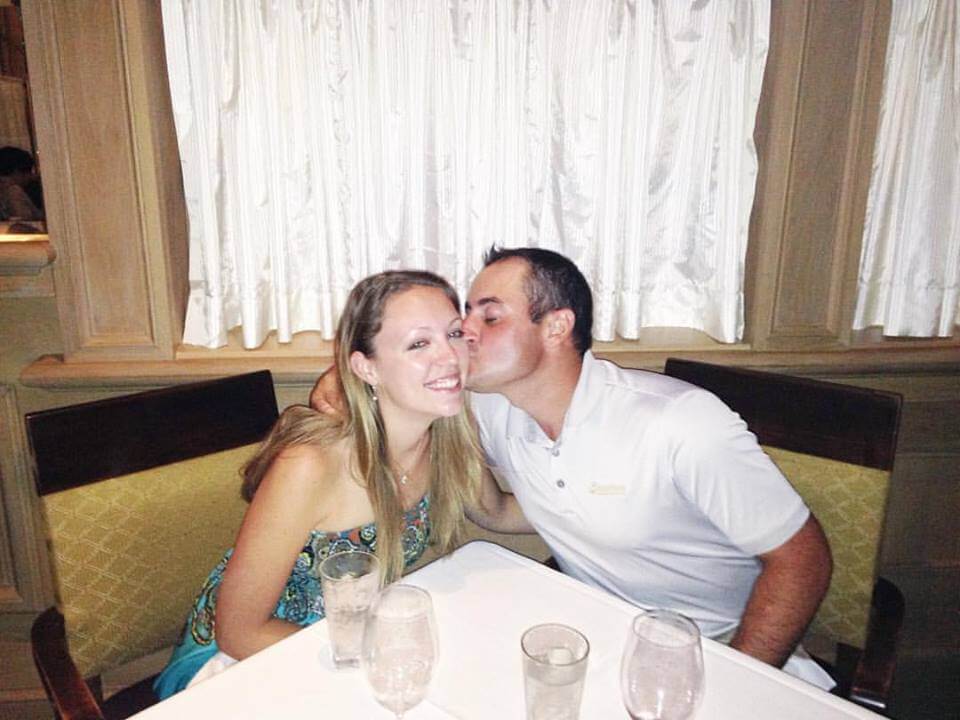 Okay, I’m going to be totally honest about dinner here. Commander’s Palace is rated the best restaurant in Louisiana. I’m more of a back-alley, locally-owned, hole-in-the-wall kind of girl when it comes to traveling and eating. I found Commander’s Palace pretentious and a bit much. They refilled my ice no less than sixteen times. But, the food was phenomenal, service is top notch, and the wine selection is on point. It was one of the best meals I’ve had in my life. Dining there once is absolutely worth it. Just be prepared to be treated like a fake celebrity.

You’ll want to kick back someplace low key after dinner here. Good thing there’s no shortage of places to do that in NOLA.

We didn’t go too crazy on our first night because we knew we wanted to spend the day at the World War II Museum.

The World War Two Museum is one of the top museums in the world and the number one attraction in New Orleans. Just a short ride away on the St. Charles Streetcar (your 24 hour pass from dinner is still valid!), the WWII Museum is an absolute must see for any trip to New Orleans, weekend or otherwise.

It has to be the most comprehensive museum I’ve visited. Including the Louvre. THE LOUVRE. With your admission ticket, you’re given a “dogtag” for a veteran from WWII. You’ll follow his story throughout the museum and educate yourself through firsthand accounts. This isn’t just another museum of items from WWII, it’s incredibly comprehensive and human. Divided in half, the museum provides details from both the European and Pacific Theaters. Make sure you visit both. 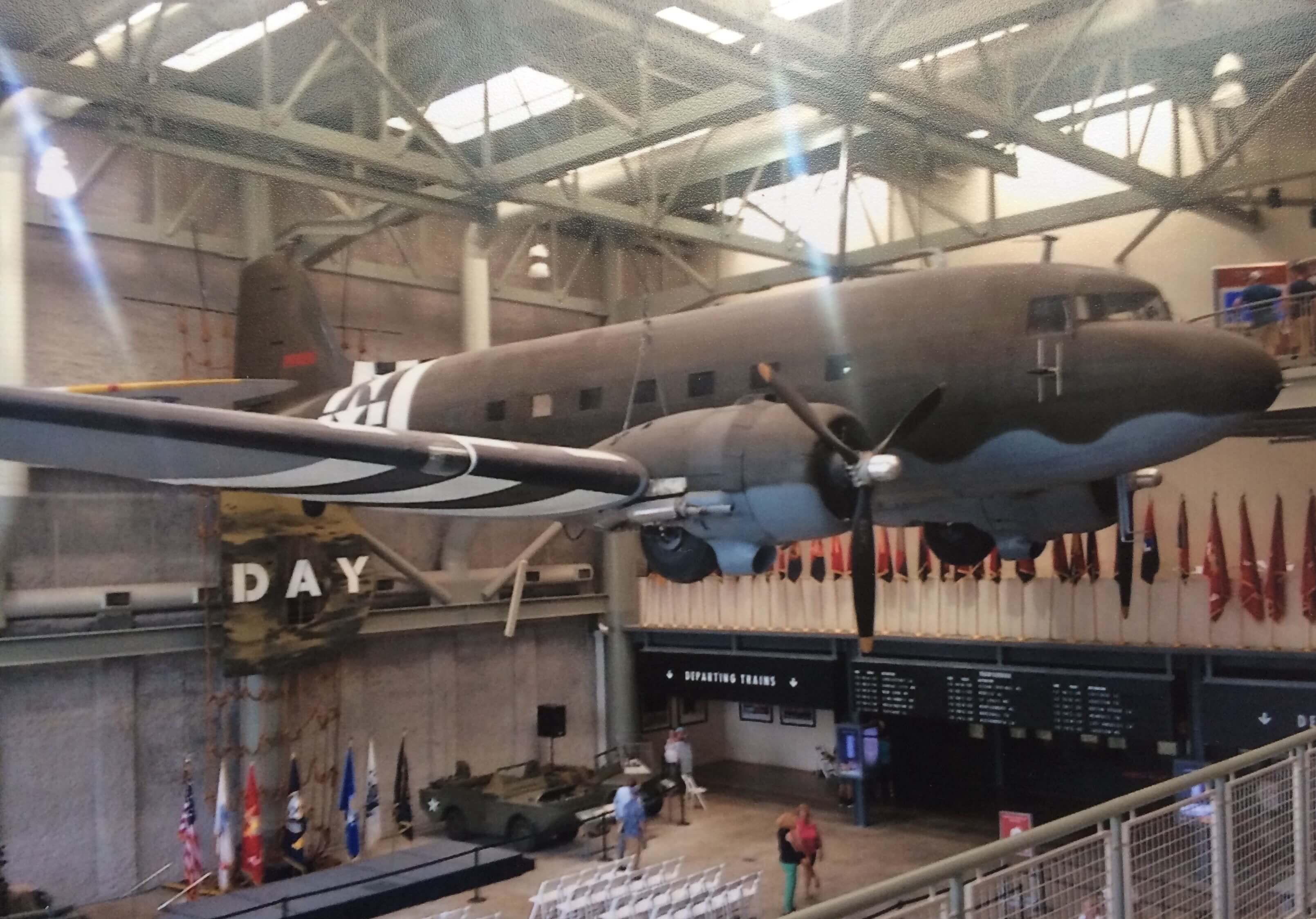 Visiting the WWII museum requires a good part of the day. It’s absolutely worth it – if you have time for one attraction, I recommend this one. But you’ll definitely be exhausted and hungry after. Cochon Butcher – famous for their muffuletta – is a five minute walk from the museum. So is Cochon Restaurant. Don’t confuse them.

We walked up to the sign for Cochon, grabbed a table, sipped our drinks, ordered a muffuletta and discovered we were at the restaurant. Which does not serve muffulettas.  So we ordered alligator fritters, which actually ended up being my favorite thing I ate the entire trip. And an extra drink because we felt bad…and because we wanted to. The muffuletta next door is worth trying. When I’m asked about New Orleans, I recommend Cochon Restaurant’s alligator fritters, then going next door for a sandwich! 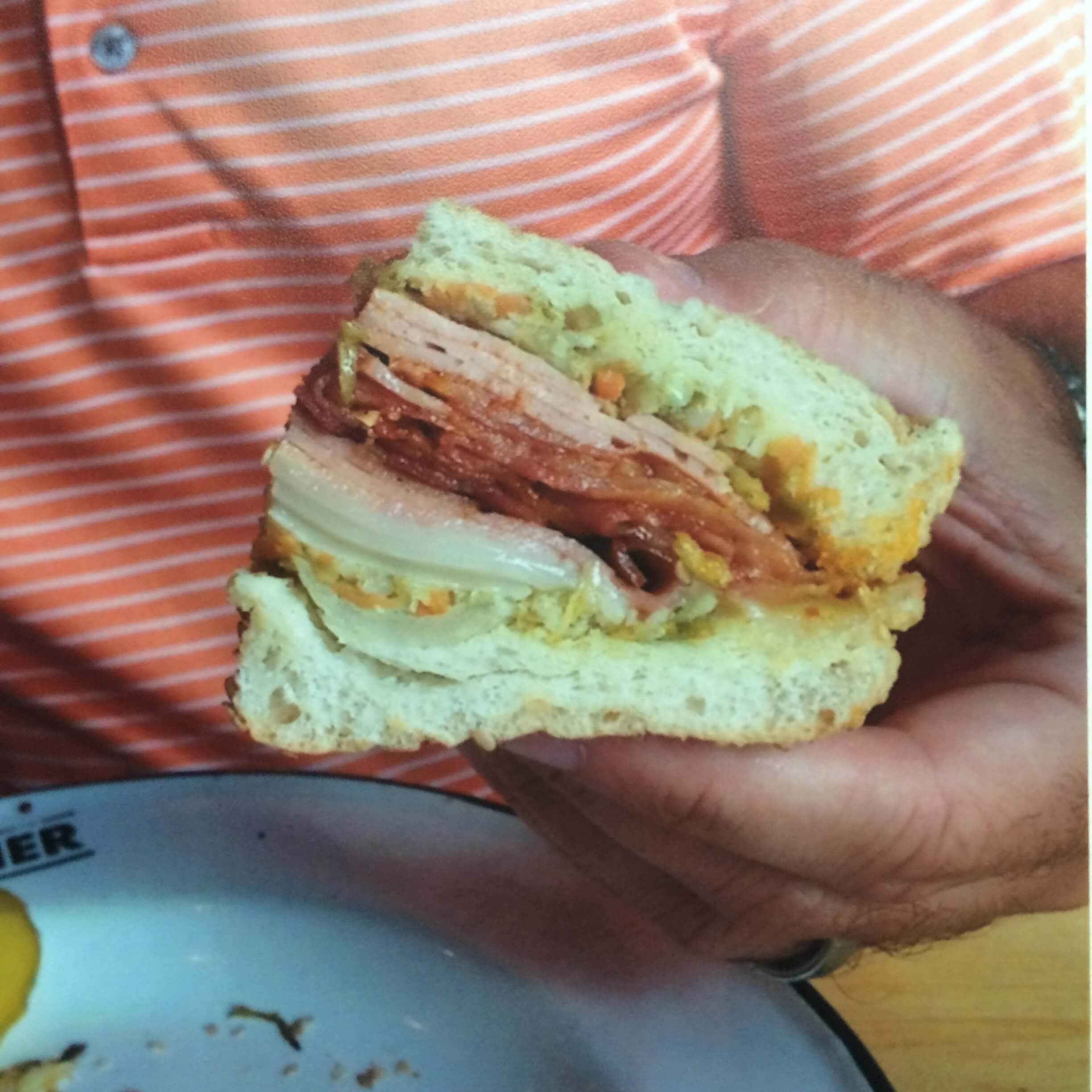 You’re probably museumed out. But make a pit stop at the VooDoo Museum once you’re back in the French Quarter. It was quirky and eclectic and very small. At $7 a person, though, it’s an easy way to learn more about New Orleans’ authentic VooDoo culture. 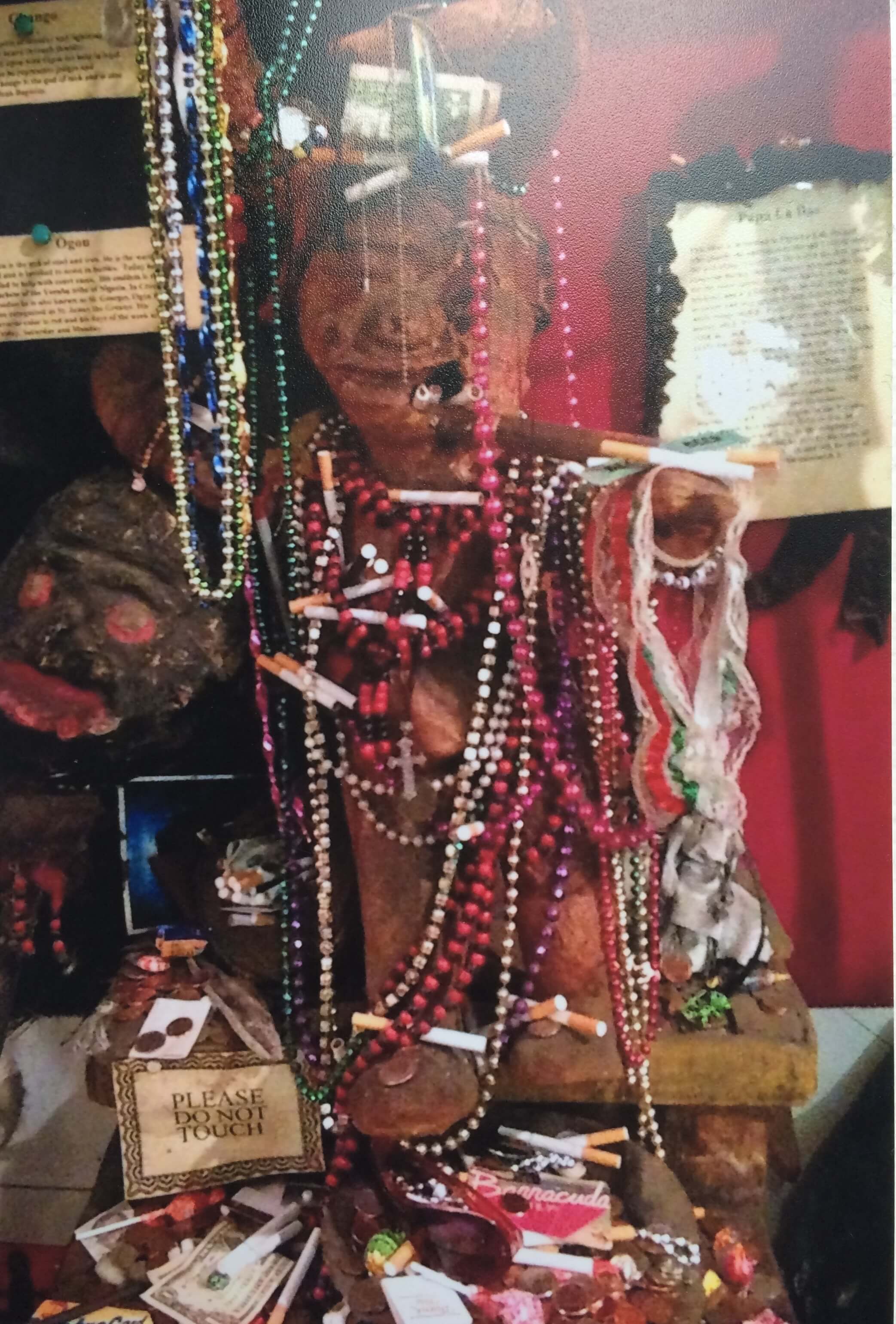 The VooDoo museum is also central to more shopping, bars, and plenty of restaurants. Take some time to shop or grab a drink or two before dinner. Since dinner at Commander’s Palace was so upscale, we opted for a casual meal at Gumbo Shop. Despite the name, they’re known for serving up one of NOLA’s best jambalayas. You’ll want a good meal before heading our to Boubon Street.

Ahh, Bourbon Street. It’s an experience. I don’t think anything else in the world is like it. Blocks and blocks of street barricaded to party. Every. Single. Night.

There’s no right or wrong place to start of finish, but make sure you stop by Lafitte’s Blacksmith Shop at least once during your weekend in New Orleans. Lafitte’s *might be* the oldest bar in the country. It’s definitely the oldest building in New Orleans that currently serves as a bar. Notorious pirate, Jean Lafitte purportedly owned the building as a front for his pirating and there are reports of a bar existing from the very beginning. The building is old and lit entirely by candlelight (except for the bar). Though its history is a tourist draw, it’s low key and preferable to the base-pumping clubs. Take your drink into the back room where there’s an old baby grand and a musician covering Bob Dylan, Joni Mitchell, and more 60s favorites.

And there you have it! A comprehensive, yet meaningful weekend in New Orleans. Have you been to any of the places listed in this guide? What would you add?

Save for Later: Pin it Here 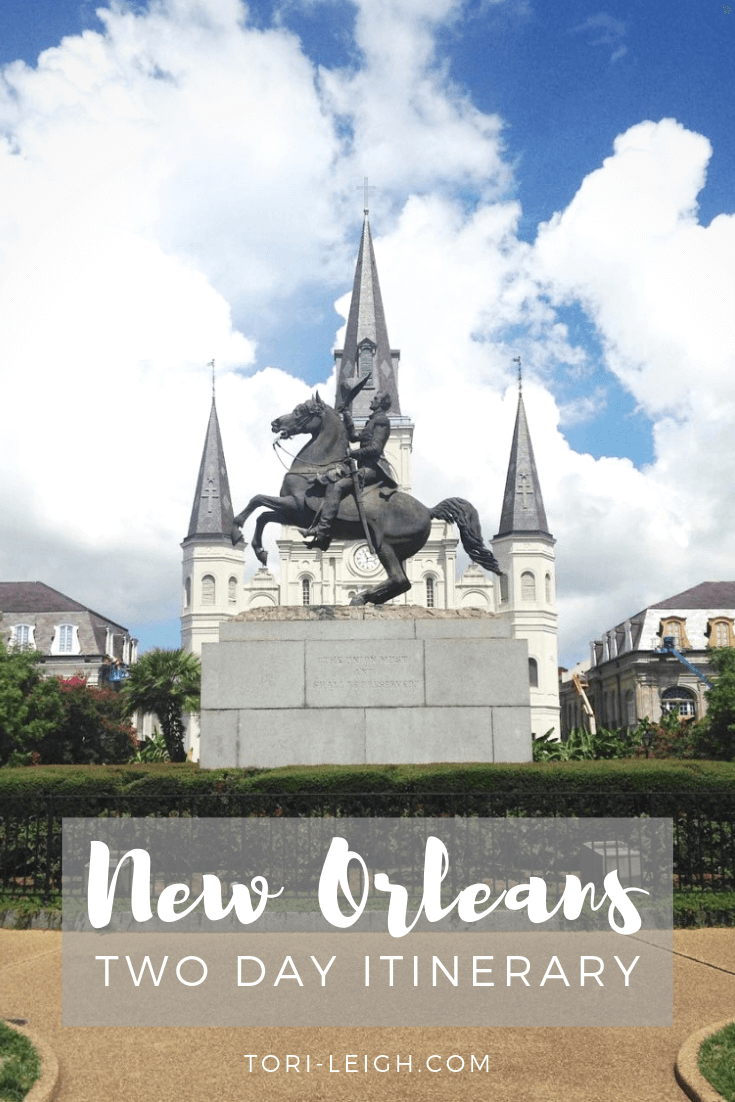 I'm a boy mom exploring and hiking the world, usually With a toddler on my back. Join our epic adventures and get inspired to start taking your own!